Team SA staged a magnificent comeback at the business end of the event which featured 20 national teams and more than 120 surfers over the age of 35, climbing from fifth place in the team standings heading into the final weekend to overtake the powerful USA, Brazil and Australian squads, who placed third to fifth respectively, and secure the silver medal in the team event.

Greg Emslie (East London) was the standout surfer at the event, going unbeaten throughout and posting a string of the highest single ride and heat scores including a near perfect 19.46 out of 20 in the final of the Masters (over 35) division where he was up against 2000 ASP World champion Sunny Garcia, fellow Hawaiian and ASP campaigner Kalani Robb and defending ISA Masters World champ Magnum Martinez (Venezuela).

Emslie started slowly in the inconsistent overhead surf for the final before finding a well shaped wave on which he produced the ride of the event, vaulting from fourth place into the heat lead by executing a seamless series of powerful, progressive manoeuvres that earned perfect 10 point scores from three of the judges and high nines from the other two, averaging out at 9.83.

Solidifying his lead with rides of 7.50 and 6.60, Emslie then sealed his first World Title since he won the ISA World Grommet champs back in 1994 by posting an outstanding 9.63 on his last ride, which included a spectacular gravity-defying floater over the lip of an overhead wave. That left his opponents in a combination situation where they needed to improve on both their scores to overtake him when the siren sounded .

Chris Knutsen (Durban) got Team SA off to the best possible start on the final day by racking up the best score of the Grand Kahuna (over 50) final, a 7.67, on his first ride. Five minutes later the ‘Old Fox’ showed his exceptional wave selection skills by cementing his third Grand Kahuna gold medal and his fourth ISA Masters gold overall with a 7.50, giving him a heat tally of 15.25 that defending champion Craig Schieber (Costa Rica), Alan Sarlo (USA) and Eric Graciet (FRA) could not match.

After Garcia had clinched the Grand Masters (over 40) title for Hawaii with a typically powerful performance in the only age category final where Team SA was not represented, Andre Malherbe (East London) bolstered Team SA’s charge up the team leaderboard with a great display in the Kahunas (over 45) division. All four competitors struggled to find long rides as the dropping tide caused the waves break in sections, but Malherbe took the lead at the halfway mark before being overtaken by Mike Latronic (Hawaii) in the dying minutes to secure the silver medal to add to his haul of a bronze and a copper at previous ISA Masters events.

Heather Clark (Port Shepstone), who like Knutsen had battled her way through the repercharge rounds to reach the Women’s Masters (over 35) final, was undaunted by facing a facing a stellar, all ASP World tour line-up including seven-time World champ Layne Beachley (Australia), Rochelle Ballard (Hawaii) and Andrea Lopes (Brazil).

Clark, the only South African surfer to win the prestigious Hawaiian Triple Crown back in 2000, proceeded to catch the biggest waves and deliver huge manoeuvres, racking up scores of 4.93 and 7.50 and 6.17 to hold the lead for several minutes. But Beachley, the world’s most successful female surfer and Australia’s only individual medallist, was not to be denied and posted an excellent 8.53 at the halfway mark to grab the gold medal. Clark briefly dropped to third place before earning a 6.17 that added another silver to her tally of two golds and a silver.

After Emslie produced his sensational performance in the Masters final, the Aloha Cup saw Australia profit from superior tactics in the tag-team relay event featuring the top eight national teams from the 2012 ISA Masters event where South Africa was not represented. The Australian team of four men and a woman finished ahead similar squads from Venezuela, Brazil and Hawaii.

A colourful closing ceremony was held on the beach to award the individual and team accolades with ISA President Fernando Aguerre congratulating the winners, thanking the all involved in hosting the highly successful event, including the President of Ecuador, Rafael Correa the Minister of Sport and the 20 government organisations that sponsored the event, and promising to bring another ISA World Championship event to Ecuador next year.

All the results from the 2013 ISA World Masters Surfing Championships, along with news, photos and video footage, can be found at www.isawmsc.com. 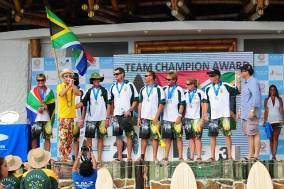 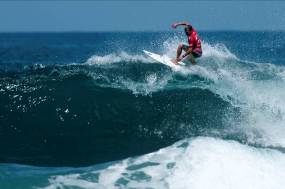 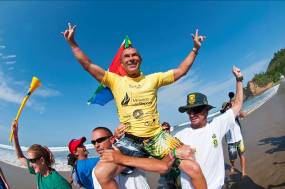 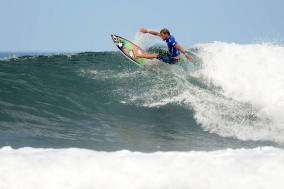 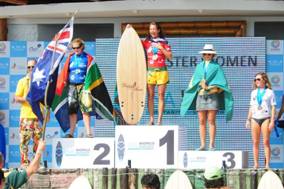 Pictured: 1.  Team SA receive their silver medal at the 2013 ISA World Masters Surfing Championships 2.   ISA World Masters champion Greg Emslie floats over a hollow wave during the final 3.   Chris Knutsen (Durban) is chaired from the beach after winning the Grand Kahunas division 4.  Andre Malherbe (East London) clinches the silver medal in the Kahunas division 5.  Heather Clark (left) on the podium to receive her silver medal in the Women’s Masters All Photos:  Courtesy ISA and photographers Rommel Gonzales and Michael Tweddle